Long Beach, CA (November 1, 2021) – A suspect was arrested in Long Beach on Sunday, October 31 after he intentionally drove his vehicle into a crowd of people. Six were injured and sent to the hospital, according to reports.

The incident occurred at approximately 2:45 a.m. at the intersection of Werner Street and Orange Avenue when a gathering of people were standing outside of a house at the end of a Halloween party. Police say a blue sedan drove into the crowd, injuring five adults and a teenager.

Some of the victims suffered broken bones, yet all are expected to make full recoveries. The driver fled the scene without stopping to render aid or wait for the police to arrive.

It was later discovered that the man who drove into the crowd had been fighting with his girlfriend earlier in the evening and allegedly committed the hit-and-run out of anger. His girlfriend was among the six who were injured, authorities said.

The man first drove his vehicle onto the sidewalk and into a group of people, then into a fence, two parked cars, and another fence three houses down, as well as more people. Those who were injured have not been identified to the public at this time as authorities continue to investigate.

The suspect was arrested and booked into the Long Beach City Jail where he was charged with six counts of attempted murder and assault with a deadly weapon. He was also charged with one count of felony domestic violence. His bail was set at $6 million, sources said.

Our thoughts are with those injured in hopes of a full and quick recovery. Nothing further has been reported at this time. 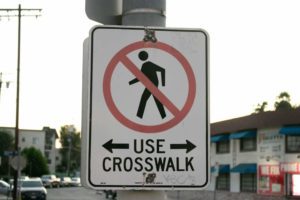 Pedestrian safety in California is a top priority given that our state is so densely populated. Pedestrians are constantly walking and riding their bikes on the sidewalks and in the roadways, presenting a constant need for vigilance and mindfulness on the part of drivers. California sadly has the highest rate of injurious and fatal pedestrian accidents in the United States.

our Long Beach personal injury attorneys are highly experienced in handling pedestrian accident cases involving injured and deceased victims. This puts us at the top of the list for providing effective and successful legal representation for those who have suffered through these difficult events. We have exactly what it takes to provide you and your loved ones with the maximum financial compensation you may be entitled to under California law.

If you or someone you love has been injured in a serious pedestrian collision in Long Beach, contact the Long Beach pedestrian accident attorneys at Beckerman Anderson by calling our law offices at (949) 474-2254 and scheduling a consultation for a free evaluation of your California personal injury claim.