Oceanside CA – Fatal Pedestrian Crash Takes One Life on I-5

Oceanside CA – Fatal Pedestrian Crash Takes One Life on I-5

Oceanside, CA (September 11, 2020) – A pedestrian accident turned fatal this past Thursday morning on an interstate in Oceanside and took the life of one individual.

The wreck occurred on Interstate 5, near Mission Avenue, at approximately 2:35 a.m. on Thursday, September 10. According to an accident report, a man, aged 51, was driving a semi-truck south on the interstate when for unknown reasons the truck struck a 32-year-old man, who was standing on the highway.

The man was thrown into the southbound lane of the roadway due to the force of the crash and was then struck by a Toyota Camry being driven by a resident of Carlsbad.

The pedestrian was pronounced deceased at the scene of the wreck.

Both drivers involved remained at the collision scene and cooperated with the police.

No further information has been made public at this time.

We would like to extend our sincere condolences to the family of the deceased victim at this time. 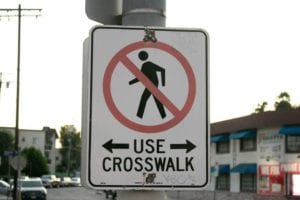 Pedestrian accidents can occur for a multitude of different reasons. Unfortunately, most of these reasons have to do with inattentive and negligent drivers who make careless and reckless decisions while behind the wheel. These decisions have the potential to and often do lead to the injury of another person or other people on the road. Driver distraction is attributed to approximately 94% of all traffic accidents in the United States.

According to information provided by the Governors Highway Safety Association, it is estimated that approximately 5,997 people lost their lives due to nationwide pedestrian accidents in 2016. This number is 11% higher than the previous year. It is worth mentioning that this is the largest single-year increase in the past 40 years.

If you or someone you love has been injured in a California pedestrian accident caused by driver negligence, you may be entitled to significant financial compensation depending on the circumstances of your accident. You could be suffering from debilitating pain due to the injuries you sustained in the wreck while attempting to deal with things like insurance companies and towering medical bills.

In the worst-case scenario that you have lost a loved one in a fatal pedestrian crash caused by carelessness in California, contacting a California wrongful death attorney will allow you to collect just compensation to cover things like outstanding medical bills and funeral costs.

Hiring a skilled and experienced California traffic accident attorney will allow you to focus solely on your own recovery, be it physical, mental, and/or financial in nature. The attorneys at Beckerman Anderson are acutely aware of the overwhelming nature of a sudden traffic collision and the aftermath that follows, and we hold a firm belief that no one should have to pay for being injured by another person’s carelessness. This experience and compassion paired with our seasoned compensation negotiation skills assure you a promising shot at full and fair compensation for the injuries and losses you may have endured as a result of a recent traffic wreck.

Contact the California personal injury attorneys at Beckerman Anderson in order to get started on your own personal injury claim today and to see if you qualify for financial compensation for your injuries and losses. Call us today at (949) 474-2254.